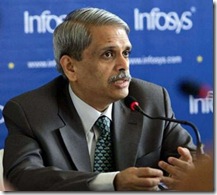 Today Infosys S. Gopalakrishnan – Chief Executive Officer and Managing Director of INFOSYS came to Trichy for a student meet at Bishop heber college which was organised by CII (confideration of Indian Industry). Here’s a full text about the speech delivered by him.

First ,He started with history of computers and the evolution made by them.

The second Transformation is about the invention of Internet. The dot com bubble burst in the year 2000 has made IT field to face a tremendous growth.Infosys started in 1981 with only seven members now holds lakhs of employees now. This is a huge achievement by us,he added also that Internet was a efficient tool to learn .After these two transitions there will be another transition which will take place after 30 years of time.

Today Internet was connected only to computers but in future Internet will connect everything from camera,electric appliances vehicles etc. 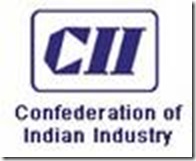 Then he started Information Technology in INDIA. Its country with the second largest in human resource.

as you all know Nandan Nelakeni is appointed as UIDAI project’s chief. This project will make a Digital India with all those corruption being removed everywhere.

IT has the major importance in India . Every job created in IT will create another 5 jobs in the related industry like retail,finance,supply chain etc .

Speaking about the economic slowdown he mentioned that the current economic status is jus like a pause for the growth. Infosys has seen 16 years of growth but there are small slowdowns in the industry which can be overcomed.

Answering to a question about Recruitment in Infosys he said

There is a slowdown in recruitment but there wont be a huge lay off in the company.

Currently there are 7000 employees undergoing training at Infosys Mysore campus.We will think about the recruitment only after january 2010 .

How to : Install HandBrake 0.9.6 in Ubuntu 11.10 Via PPA
Video of the week [ Round Up ]
Internet’s 25 Most Powerful People
Giveaway –1 Free tw2buzz invites
search results
Airtel launches SMS facility for Twitter