It was previously news feed and most recent menu which was displayed at the top of the Facebook wall which provides us the latest activity from your friends.But now the news feeds are integrated into one and the news items are classified as “Top stories” and “Recent stories”.

Top stories are the most important updates that was marked with blue corner.

Recent stories are like live feed of news happening at the moment.

So if you are signing into Facebook after many days you will see the important updates in the “top stories” section and below that you will have recent stories.

Facebook news ticker feature is now live at the right cornet above the chat sidebar.You will have the live news ticking at the corner and you can see the updates without clicking it.

The Facebook top nav bar is now floating at the top of the window for better and easy navigation.

The photo album activities are displayed a little bigger than previous versions.

Facebook groups your friends into separate lists as per the smart lists.Which is exactly similar to Google+ circles feature. 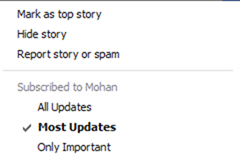 You can have the ability to switch the subscription type for any person.

Facebook’s major overhaul has made frustrations for many users as they find it difficult to use the new layout.What do you think about this new facebook layout?