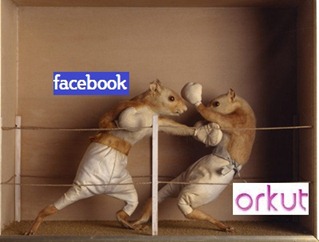 Facebook is becoming popular in India,the growth of facebook in India is tremendous this year.
When it comes to social networking in India,Orkut was the major player since 2006 because it was the first social networking site launched in India by Google.
When we compare ,both  does the same “connecting with friends” but each have some specific features.

Orkut was founded by Orkut Büyükkökten. in January 24 2004 .Later acquired by google.Initially orkut was launched in US,Most users of orkut were in US by that time.By the word of mouth Orkut spreaded to Brazil and India where the Orkut’s growth picked up speed.The US users later switched to other social networking sites.Currently Orkut is famous in Brazil (50.6%) and India (20.4%)
Facebook was founded by  Mark Zuckerberg  in 2004 at Harvard university as a on-line network to connect with friends.Facebook transformed as a platform where programmers can create applications on it,Today there are 800,000 developers around the word.

User Interface is the major concern for growth , Orkut has simple user interface that a average person can use it without hassle. While face book still simple but has some complex feature that an average person has to be guided first.Orkut recently updated its interface with new one but many still opt for old interface.

Nowadays students and developers go for face book because of additional features like facebook applications which can be developed by thirst party, community pages,open graph.One more feature that a developer likes in facebook is “facebook connect” which allows huge possibilities of integrating secure applications inside WebPages.Orkut doesn’t have any of these features needed by a developer.

One major reason for  facebook’s success is gaming.The game application is integrated right inside the facebook . Over 83 million active users for the Farmville game alone. Many of my friends are die hard fans of farmville and mafia wars.The fact is I started using face book just to play mafia wars.Now I literally not using Orkut nowadays.

Major problem for facebook is privacy.People can easily find others personal data.BTW orkut has some better security features like applying security for photos,scraps etc.This gives a some extra control to our personal data shared on internet. 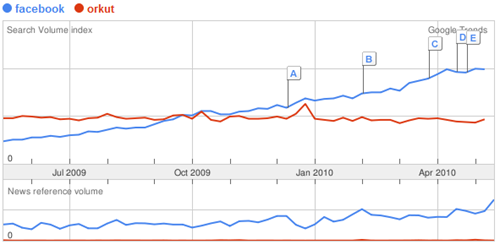