Twitter just announced its new home page redesign complete with trending topics and search. Publicly launched at the 2006 South by South West interactive festival, users first flocked to the site as a way to communicate with friends and festival attendees. However, as we’ve seen in the past few years, the site has evolved into a multifaceted real-time tool. The community has given timely updates on earthquakes, the Iran election and we’ve even seen professional poker players bluff in real-time Tweets. Twitter has evolved into a community where users can discover breaking news and trends and the new home page certainly matches that.

Says Twitter cofounder Biz Stone in a blog post , "Demonstrating the power of Twitter as a discovery engine for what is happening right now through our Search and Trends often awakens a sense of wonder which inevitably leads to a much more compelling question, "How do I get involved?"

And it seems at this point, if you haven’t gotten involved you’ve been living under a rock. While the site always contained the ability to search and discover trends, these features were buried. Today, with the new design, all of those television viewers who refused to give into the peer pressure of Oprah and Ashton Kutcher’s hour-long Twitter tutorial  will finally understand the value of the service. Twitter isn’t just an emotional weather report generator, it’s a taste of zeitgeist. 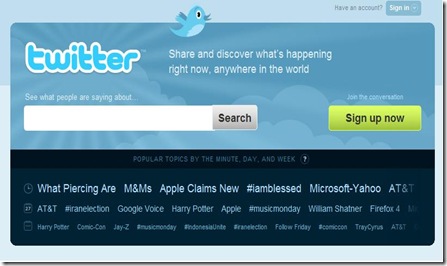 In some cases, the spirit of our times is simply our lust to win an iPhone in a Twitter sweepstakes or our willingness to spam our friends with Spymaster, and in other cases it is breaking news about the events, companies and issues that effect our lives. One of the interesting aspects of the new trends section is that unlike real-time search engine One Riot, Twitter not only offers the list of related-tweets, but it also offers a short rationale for a topic’s popularity. This contextualization makes it particularly useful for news discovery.

Those who’ve abandoned their Twitter accounts might point to the frivolity of some of the home page’s current trending topics; however, Twitter’s ebb and flow is only as silly or intelligent as our society dictates. When the President of the United States encourages you to tweet your senator to support health insurance reform, you know you should probably continue to keep an eye on this micro blogging superstar. 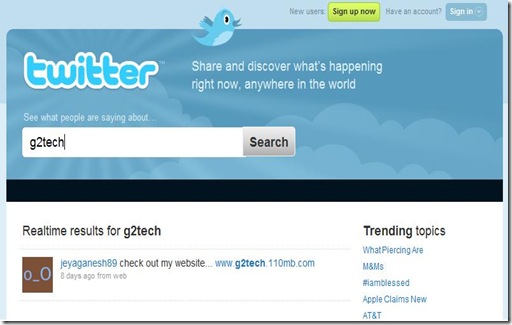 -POPULAR TOPICS BY THE MINUTE, DAY, AND WEEK

Twitter updates minute by minute update on the world of micro blogging..

Trending topics are displayed below search bar which is as easier to use..